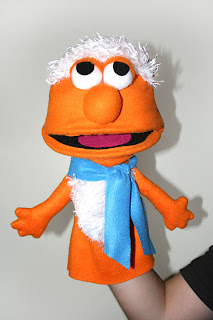 My mom (the master) made a lot of amazing puppets when I was a kid. She made fun and fluffy characters and Fraggles with ping-pong eyes and fuzzy hair. My parents would put on puppet shows at children’s church every Sunday creating lifelong memories for us kids.
In my first attempt to make a puppet I decided to check online for some pointers. I found a great series of video tutorials on eHow.com for “How to Make Puppets”. The videos come from Paul at puppetsandstuff.com. It is a really easy puppet pattern with a minimal amount of sewing. So get your glue gun hot and ready to go.


(The videos are a bit jumbled on eHow and they aren’t labeled by step so I listed the links here in their correct order.)
TOOLS AND SUPPLIES


* I didn't use a hairdryer, contact cement, foam brush, or pink rubber foam. Instead I just used pink felt and hot glued it to the mouth.
* Used an x-acto knife instead of a box cutter.
* Didn't use a pom-pom, just worked with the fleece I had.
* Used black felt cut out into small circles, instead of the adhesive felt tabs.
* Didn't use foam for eyes, used white fleece and stuffing instead.


PART 4: STUFFING THE ARMS
* I stuffed the arms with shreds of leftover fleece and then hot glued the tops of the arms together on the inside to keep the stuffing in. 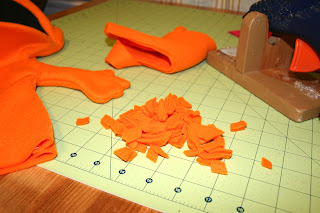 PART 5: MAKING THE MOUTH BOARD
* I used black felt and just hot-glued it to the cardboard piece instead.


PART 6: INSERTING THE MOUTH BOARD


PART 7: ADDING THE TONGUE
* I just used pink felt and hot glued it onto the mouth.


PART 8: ADDING EYES
* I made the eyes by cutting out big circles of white fabric, gathering the edges together over a ball of stuffing and securing tightly with thread, wrapping the thread around a few times tightly and then tying a knot (Just like he makes the nose). I cut off the excess and hot glued the eyeballs to the head. Then I  cut out small round felt pieces in black and hot glued them on. Lastly I cut out half-circles of orange fabric and glued them onto the eyeballs and head to create eyelids.


PART 9: COMPLETING THE EYES
* I like his eyes a lot better but I was considering safety of the eyes, in case my baby girl decided to put them in her mouth.


PART 10: ADDING A NOSE
* I just cut out an oval shape of felt and glued it onto the face.


PART 11: ADDING HAIR
* My “hair” is just some plush fabric bunched up and hot glued onto the head. I used the same plush for his chest hair.


PART 12: ADDING WIRE TO THE ARMS
* I skipped this step

The puppet turned out pretty cute and was really easy to make, although mine turned out a lot differently from Paul's. There are probably an endless array of characters you can make from this one pattern. Thanks Paul from puppetsandstuff.com!

Hannah
I'm a long time crafter and a stay-at-home mom with a beatiful toddler, Allison. Just trying to figure out this mommy business and getting some creative time in during nap time.